Pete the Pirate joins us for Thanksgiving

My husband has a thing for purchasing odd and unusual items during this Fall/Thanksgiving/Halloween season. A few years ago he found “Pete the Pirate” at a second hand store.

We do love to cruise the aisles of the second-hand and Goodwill stores……You just never know what you will find. You can find things that you did not know you needed to have until you actually see them. That is what happened with Pete.

We were looking through all the different things the store had to offer.  I am usually looking at books for myself and the grandkids, or craft items (you can never have to many books or craft items). I noticed my husband hanging out in the back of the store with a bunch of other guys.

I thought it would be wise to go see what he was up to.  As I came around the rack that held the bath towels, I saw him…… He was standing next to a life size pirate. This particular pirate came complete with hat, beads, peg leg, hook and a box full of electronics.

I did notice that the majority of the people hanging around the pirate were guys. They all looked impressed and were making comments of “Sweet!” “That is so Cool!”…..

It did not take long and Pete was in a cart, legs dangling over the sides, holding his box of electronics and headed for the check out line. I should specify…..he was in a cart pushed by my husband, who felt he had won the pirate lottery.

As we stuffed Pete in the trunk of our car we were grateful no one reported to the authorities that someone was stuffing a body in a car trunk.

Once we got Pete home, we promptly sat him in a rocking chair in the living room and tried hooking up his electrical stuff. We discovered that when you plugged him in, his head would swivel and his very blue eyes would move. It was eerie the way those eyes seemed to follow our every move. We also discovered that if we were electronic wizards we would be able to figure out how to make him talk through a transmitter and receiver set up.  As we are not electronic wizards, all that stuff is still tucked safely away in the box that held it at the store.

The first Thanksgiving after Pete joined our family we hosted my side of the family for Thanksgiving dinner. We parked Pete in his own chair by the table and waited for the reactions as family arrived. We were not disappointed. Some were slightly freaked out. Some were totally freaked out (mainly the women) and some were in awe (the guys).

Pete has now become a permanent fixture in our home.  He hangs out in a spare room upstairs that houses the toys for the grandkids. At first our grandson did not like Pete. He has since learned Pete is harmless and that this is a pirate that will willingly lend his hat to a 5 year old.

Meanwhile, we continue to enjoy the second hand
and Goodwill stores.  I have talked my husband
down from a few purchases.  Purchases, such as a
foot tall, owl shaped candle and a scraggly teddy
bear with a human face.

Last week I was unable to talk him down from his
latest purchase……an adult sized costume of a coyote
(I think it might be a coyote).  I guess if someone can
have a good time for $4.00…..who am I to stand in
his way?

After 36 years, I have discovered that marriage is about compromise. He buys a $4.00 coyote type costume and I buy a $4.00 tea set. Who knows, in the coming years, what will find a home in our spare room.

May you have a safe Halloween or as I knew this holiday as a kid….Happy Reformation Day!

Thrift shops are my favorite places for inspiration,
you never know what you are going to find. It’s a treasure hunt.
Paul Octavious

About the Chicken Grandma 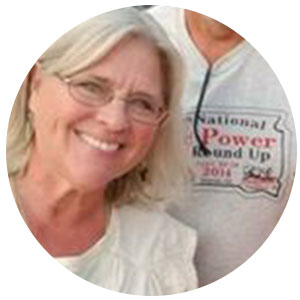